The teaching of naturalistic evolution permeates many facets of our society and is accepted as a veritable fact by a majority of the masses. Critics of Darwin's doctrine are often branded as uneducated, unintellectual, and scientifically irrelevant.

In recent years, however, and largely based on the intelligent design movement, the ideas of evolution's opponents have received greater dissemination and notoriety. As a result, many individuals have been awakened to the inconsistencies, contradictions, and pseudo-science underlying the teaching of macro evolution and have renounced the doctrine of neo-darwinism. This list includes individuals from the highest tiers of scientific scholarship, research, and academia. The responding backlash among Darwin's naturalistic proponents are often vitriolic attempts to undermine creationists who have discredited their endangered arguments, once thought to be impregnable.

Unraveling Evolution explores the doctrine from a biblical, scientific, and cultural examination of the evidence. This work provides readers with an overview of the major features and failings of the doctrine of naturalistic evolution, as well as a critique of current attempts to couple aspects of the theory with biblical theology. Readers will come away with a better understanding of the controversy and a heightened readiness to respond to evolutionary ideology.

Unraveling Evolution (revised second edition) by microbiologist Joshua Gurtler explores the important issue of macroevolution. As a scientist and Bible believer, Gurtler challenges the validity of this theory so widely accepted in today’s world. This excellent study offers understandable evidence and argumentation suitable for High School students as well as detailed information in the 13 lessons and 12 appendices to broaden the understanding of adults and college students. Lessons 1 and 2 ask the questions, “Can we trust the Bible as the inspired word of God?” and “Is the Bible the Word of God?” Lesson 3 gives the background to Darwinian Evolution, considering variation within a kind, leading to the death of Darwinism. Lessons 4 and 5 consider the failings of (so-called) Theistic Evolution. Lessons 6-8 address defeated Neo-Darwinian dogmas. Lesson 9 looks at the geologic column, the fossil record, the absence of transitional fossils, and the phenomenon known as the Cambrian Explosion. Lesson 10 considers the theory known as Punctuated Equilibrium. Lesson 11 disputes the theory of Uniformitarianism—the foundation of much of Darwinian theory. Lesson 12 addresses the origin of man, and lesson 13 ends by pointing out the social fruits of evolutionary teaching. The appendices offer charts documenting assertions made in the text, articles exploring specific topics in depth, and quotes from scientists regarding issues explored in the text. The bibliography fully documents all sources cited in the book, allowing the reader to confirm and further study this vital subject. 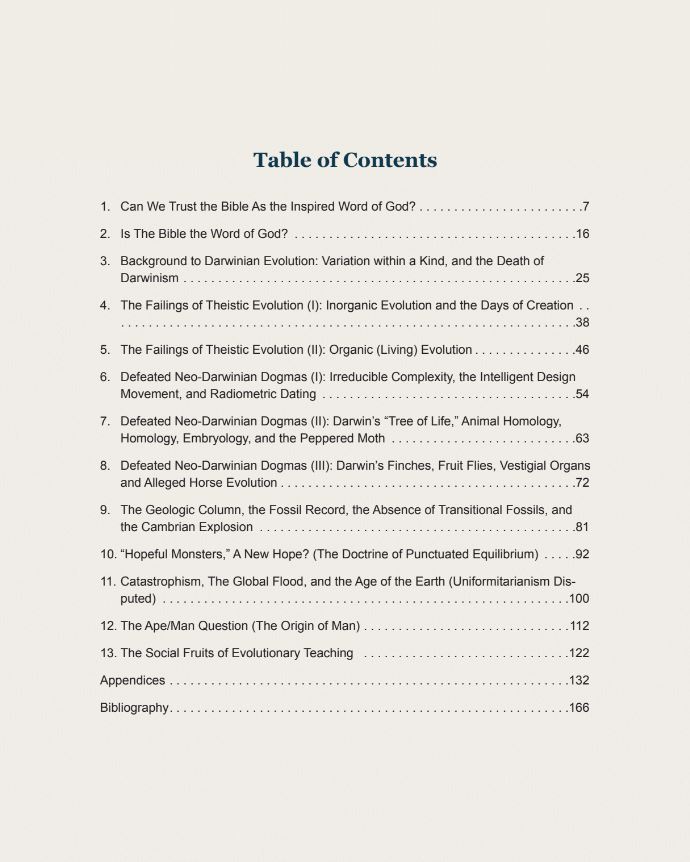 The Message of Nehemiah / Revised edition